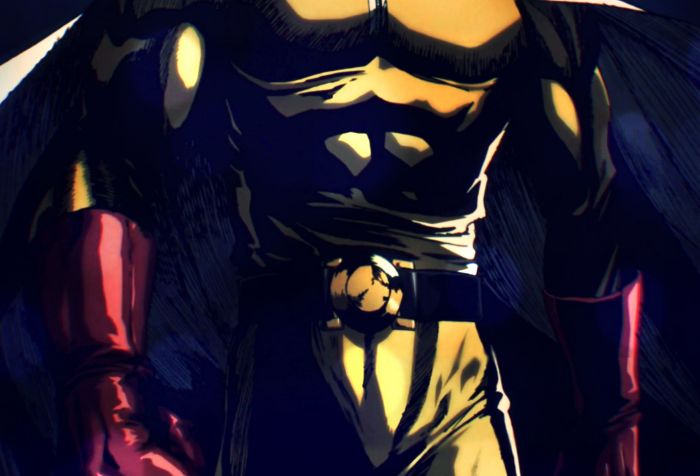 I was a little underwhelmed with the latest episode of One Punch Man. It’s for the same reason as always. As soon as I think Saitama is about to show out, he doesn’t. Don’t get me wrong, The Ultimate Dilemma set up a lot of plot information this week. But, this week I think we missed out on something that had the potential to be epic.

We pick up where The Resistance of the Strong episode left off. Suiryu on the ground half alive and Saitama looking like the savage that he is. Bakuzan is still in the arena and recognizes Saitama without his disguise on.

After a few words of banter, Bakuzan finishes hyping himself up and begins to attack Saitama. Saitama is taking his time to survey the area and notices a few fighters that he met during the tournament passed out.

Saitama takes a few punches from Bakuzan, but it does nothing to him and with one punch Bakuzan is headless. He actually loses part of his chest too.

Suiryu tries to stop Saitama from going after Gouketsu because he’s overpowered and almost killed him. This only intrigues Saitama more and he goes to find Goukestu.

Earlier I mentioned that we missed out on something epic. This is what I am referring to. The audience does not see Saitama and Goukestu’s confrontation. I guess we are supposed to assume Saitama ran up on him and punched his head off, but I highly doubt it.

Saitama has been looking for a challenge all season long. Are you trying to tell me that he wouldn’t have at least given Goukestu an opportunity to try and fight?

I did not expect Saitama to no-sell both the Dragon Level Monsters. Plus, the disrespect of not even letting us see the encounter between Goukestu and Saitama is really confusing. He’s supposed to be a former martial arts master.

Should we assume that Saitama’s inevitable confrontation with Garou will be anti-climactic as well?

Something cool did happen though. Suiryu decided he wanted to be a hero and asked to be Saitama’s apprentice!

After the events at the arena, King and Saitama run into each other on the barren streets of the city. The Monster Association has retreated to their base and Saitama starts to complain about being bored.

King actually has some very encouraging words for Saitama. They are meant to make him examine himself and understand he still has untapped potential. King is right! Goukestu confirmed that there are stronger monsters out there in the last episode. It was great, even if it was regurgitated from a manga he read.

Garou makes an appearance in this episode.

He has just finished his fight with Watchdog Man and is wounded. When he sees King, he regains some stamina and charges at him full speed. He’s so focused on King that he doesn’t see Saitama, but Saitama sees him and kicks him to the side.

This is the second time Saitama has encountered Garou and he still doesn’t realize that he is the self-proclaimed Human Monster with unmatched martial arts skills. He keeps putting him on the ground with no effort, so why would he?

Garou is left laying in a hole in the wall as a result of the kick from Saitama.

At the end of the episode, Speed-O-Sound Sonic is offered a chance to join the Monster Association by some old acquaintances. He decides to take them up on the offer so that he can rival Saitama.

I wish someone would tell these people consuming monster cells that they won’t gain ultimate power. They should know that they will still be mediocre.

Sonic decides to cook the monster cells so that they will taster better.

In the midst of Sonic cooking monster cells, the Monster Association sends the Hero Association a message via an infected human. Monster antenna burst out of his skull and that’s fin.

We’ll see how this progresses next week.