This episode of One Punch Man surrounds Garou the whole time. The last time we saw so much of him, he debuted his ultimate technique Fist of Flowing Water Crushing Rocks and was took down an entire gang. Unfortunately, Saitama is still playing video games, so he had no weight in this episode. But it was still an exciting entry!

We pick back up with Garou surrounded by Class A Rank heroes. He’s tired and seemly overwhelmed. But, Garou still puffs up his chest long enough to call all of the Class A Rank heroes trash and tell Death Gatling that they should call some Class S Heroes because they suck and won’t be him.

Death Gatling states that all the Class A Heroes have faced death and are “tough as hell”. Gatling feels they can beat the infamous Hero Hunter because he hand-picked everyone involved.

The group has a good run at Garou, but even while he’s poisoned and flashing back to his childhood, Garou still manages to dismantle half of the group. He uses his Fist of Flowing Water to take everyone out.

Glasses tries his hardest to make a difference in this fight, but Garou ends up being too much to handle. Glasses ends up having a mini flashback to a time when Saitama saved him and some co-workers from danger.

Apparently, Saitama gave him some encouraging words that prompted him to become a hero. However, the most heroic thing he could do before passing out was hit the distress button on his pager.

Death Gatling challenges Garou as well. Garou tries to explain there is a child nearby and his Death Shower could kill him, but Gatling has a one track mind and lets off his ultimate.

The entire area is shot to pieces except for the door that Garou protected while deflecting the Death Shower.

As a result, Gatling gets punched out easily after that.

Unfortunately, the little boy Garou protected ran away after he saw the carnage that Garou left while fighting for the monsters.

Genos shows up just in time to spar with Garou. Genos arrived answering the distress signal from Glasses. They have a great encounter. At one point, Garou takes on some of Watchdog Man’s technique and rips off Genos’ arm.

Garou also evolves. his hair turns red and it looks like he popped a blood vessel in his eye while trying to power up.

But, Genos has undergone some upgrades since last time he fought and traps Garou against a tree. Eventually, Genos has Garou pinned down and plans to blast him away.

Master Bang shows up and kicks Garou out of the way before the blast. Genos respects the wishes of Master Bang and Boom and lets them begin to hand the situation.

Saitama is still losing at video games to King and he’s losing miserably. They finally hear the distress call about the Hero Hunter and Saitama decides to go because he has a faint worry about Genos.

I guess he’ll show up during Master Band and Booms fight with Garou next week. 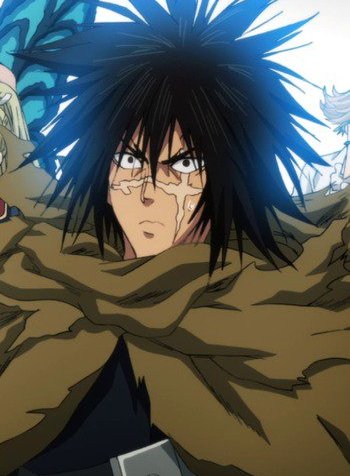 Oddly enough, this episode of One Punch man left out Speed-O-Sound Sonic’s monster cell dinner completely. We didn’t get a follow up about him or the actions he took in the previous episode. I was kind of looking forward to seeing what would come of the cooked cells.

Will they enhance Sonics powers more? Will the monster cell enhancement be moot because the potency was cooked out of it? Will Sonic’s metabolism play a part in whether or not the cells even make a difference?

We don’t find out. But, it’s still a pretty good episode.

Saitama doesn’t play a part in this episode, except that he and King are too busy playing video games to hear a distress call from the Hero Association.

Speaking of which, the Hero Association was infiltrated by a transforming monster in the previous episode. This monster brings a message from the Monster Association in the form of one of Gyoro-Gyoro’s eyeball vessels.

They propose a cease-fire and living in harmony with humans. However, that’s just a horrible joke because moments later, the monster holding Gyoro-Gyoro shoots one of the Monster Association executives dead.

This battle is at the request of King Orochi. The plan is to bait the Class S heroes in with the hostage and then go for the kill. While Gyoro-Gyoro explains the plan to the monsters, King Orochi starts pointing our weak monsters and eating them. Do-S is almost the next victim, but Gyoro-Gyoro vouches for her skill set.

One of the monsters at the association meeting kind of favored the Menos from Bleach. I’m just saying.

Child Emperor tries to come up with a plan of action to storm the Monster Association and save the hostage, but Metal Knight just wants to bomb everything to get rid of as much of the monsters at once. They are at an impasse when we cut away.

The news outlets report on the Monster Associations demands and as a result, the entire city is in terror.

Next, we finally get some time with Garou. He’s just waking up from the kick Saitama gave him last episode. He limps to a nearby shed to recuperate but is followed by Death Gatling and a group of other heroes.

One of those heroes kind of looked like Gohan from Dragon Ball Super. He had the same hair cut, glasses and the green jumpsuit. I’m just saying.

Garou is still very injured when he is surrounded by Death Gatling’s group of heroes. He puts up a good fight, but when the episode comes to an end, he is completely surrounded and out of options.

Before the heroes arrived, Garou was talking to the little boy who always lets him read his Heroes Almanac. So perhaps in the next episode, the little boy will step out in defense of Garou, since he doesn’t know him as a villain.